How do you know which supplements are included in your book?

Some of you may have seen that you can order past supplements from the various Lutterloh websites. You may wonder though, which patterns do I already have in my current book? Well, if you have a book that was published anytime after 1974, there is a way to figure this out.

1974, by the way, is the year that Lutterloh switched to the format that they sell currently. The yellow shipping box, and the seven supplement, 280 patterns format were both implemented in this year. Before 1974 it can be very difficult to decipher exactly when your patterns were released unless they actually have a date printed on them.

The supplement numbers that are included in your book can be found on the fashion photo pages of patterns 1, 41, 81, 121, 161, 201, and 241. They are listed after the Reg. No. on the bottom or left side of the page. In the current books they will look like this on the left side of the photo below: 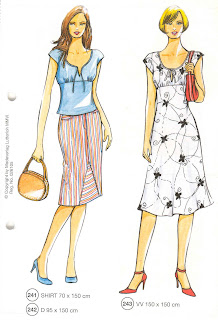 The first zero appears to be a space marker, the next three digits are your supplement number and the last two digits indicate the number of the month the supplement was published, 02=February, 05=May, 08=August and 11=November. So from the above example we know we are looking at supplement number 261 released in the fifth month or May of 2006. The year is listed in Roman numerals.

Lutterloh currently uses a six digit number to indicate the supplement number but this was not always the case. Below are fashion photos from books from the 1970s and 1980s. 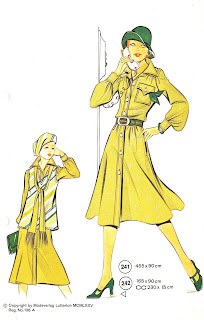 The supplement number was first listed as a three digit number with a letter to indicate the month. F=February, M=May, A=August and N=November. It wasn’t until the early 1980s that Lutterloh started to print the copyright year on each and every pattern page. 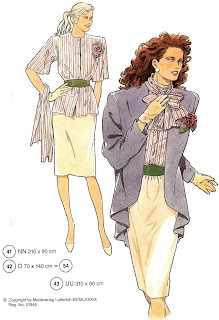 Later, in the late 1980s, they changed the supplement number to start with a zero and used a number to indicate the month. 2=Feb., 5=May, 8=Aug., and an 11 for November. The two digits in eleven must have been confusing to some because they soon changed again to the six digit number we see used today.

Unfortunately I have recently found a discrepancy that contradicts this clever numbering system. I noticed my book from 2008 has a few numbered pages that are repeated. It appears as though, for some of the patterns, they actually combined pages from two different supplements. I will have two pages that start with, for instance, number 121 and the following few pages include some patterns from 2008 and some from 2005 until they get to the page of the next Reg. No. I hope this isn’t going to be a regular new format. It will just be too confusing to find which patterns you’re missing.

Now, barring any new changes to the manual format, you too can decipher the make up of your Lutterloh pattern book. There’s no reason to wonder, which supplements do I need to complete my collection?

Where to find an article on our blog

Some of our favorite sewing links: